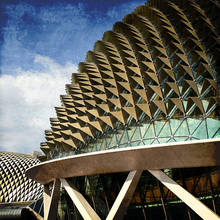 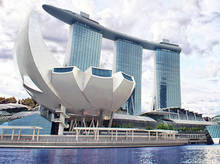 Despite Singapore for being well-known as the ‘Little Red Dot’, one of the smallest countries in the world, her continual progression had made her one of the most popular places to visit. Singapore is a cosmopolitan city with several new attractions instantly amazes visitors and even her own people. In these 4 hours, explore the fascinating concrete jungle in the comfort of our premium limousines.

Let us start the tour the Esplanade, also known as the ‘Durian’, is where most art and musical activities are held. Next we will travel along the Marina Bay to the Merlion Park, home to our national icon Merlion. It is a must to take snapshots to prove your visit to Singapore.

Next stop we will turn into the Marina Bay Sands, the biggest hotel in Singapore. One of the highlight is the Sands Sky Park offering a 360 degrees’ view of Singapore. Moving downwards, you will notice The Art-Science Museum with the shape resembling a lotus. Beside it is the Helix Bridge which looks like the structure of human DNA, after which is the Youth Olympic Park in commemoration of the inaugural of Youth Olympic Games hosted by Singapore.

Next we will drive round the enormous Fountain of Wealth at the centre of Suntec City Mall. Last stop will be the place when Sir Stamford Raffles first step foot in Singapore. Around here, you will also be able to look at the Empress Place and the Asian Civilisations Museum. More details...

Though Singapore is relatively new, there are enough history and culture that attract tourists to explore and understand. Within the 4 hours tour, be ready for abundant cultural and historical treasures to entertain and captivate you.

The tour starts by picking you up from your hotel anywhere in the city area. You will proceed directly to Asian Civilisations Museum where you travel down the path of history. In here you can explore the show cast of ancient artefacts from the past five millennia. Next discover the unique hybrid culture of Peranakans, whom are the descendants of early Chinese and South-Indian communities, in the Peranakan Museum.

End the tour in National Museum of Singapore, the largest in Singapore. Admire the splendour architectural exterior while visiting the wide range of galleries within. More details...

Welcome to the SIXT special limo service! Rent the perfect limousine in Singapore for the occasion, chauffeur included if you so desire, and enjoy the comforts of VIP treatment and luxury travel in one of our limousines in Singapore. The SIXT Singapore limousine service is available worldwide in more than 600 urban locations, all of which are open to online booking. Special VIP offers for our limousine chauffeur service and Singapore airport transfer make sure that you travel in comfort at a bargain rate. Our chauffeurs all speaks English language and are very reliable. Your chauffeur will pick you up at your destination in the limousine you have rented and remain available for you at all hours. SIXT rental limousines, Singapore Cruise Centre Transfer and Changi airport transfer provides luxury models of vehicles, perfect for carrying you and your business partners to exclusive meetings. Enjoy in comfort and style when using our Singapore Touring services. Singapore private tour allows customization and tour guide can be provided upon request.